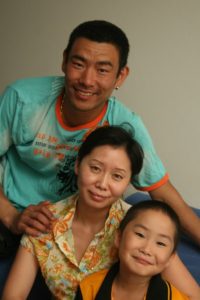 Jack’s journey from Shenzen, China to Northern Territory, Australia is a great one to share.  Guests who were impressed with the food and service at Shangri-La left their contact details with the restaurant staff.  Fortunately for Jack, the Chef that the calling card was left with did not have dreams outside China.  Jack, on the hand, grabbed the opportunity to contact the employer directly.  Four years later and with the help of Margie Dizon, Registered Migration Agent and Psychologist at Migration Corporation of Australia (MCA), Jack enjoys the ultimate prize, his Australian citizenship.

“At the start, Jack could not even call me.  We couldn’t even talk to each other as he spoke minimal English, ” remembers Margie.  Jack initially came on his own on a subclass 457 visa.  He battled homesickness and the compulsion to give it all up at the time.  It was not until 6 months after and many repeated phone calls that we got together for dinner and his English improvement was phenomenal then. Eventually, his family decided to join him.  Now, all three family members speak very good English and Jerry, their only son, speaks English like a local.  They obtained their permanent residency in 2009 and Jack qualified for Australian citizenship in 2010.

He has also embraced the Australian life with the purchase of his home and taking up fishing as a hobby.  According to Jack, his journey from China to Australia, and everything that followed wouldn’t have been possible without the tireless efforts of Margie Dizon, Cecilia dela Vega and the team at MCA.

Jack now owns his own restaurant called the Regent Court Chinese Restaurant (25 First Street) in the booming town of Katherine in the Northern Territory.  He boasts cooking the best Chinese food in the locality.  With his passion and flair for cooking, we believe him.