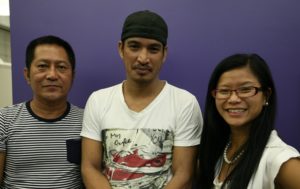 Theirs is one tough story to tell and share. Both Edgar and Orlando started at the same company in the previous decade. However,  many years later and many challenges later, the unfortunate downsizing or closure of their employers’ businesses kept forcing them to look for greener pastures.

They could have easily given up and gone home but they were committed to a life they have known for at least six years, in Darwin, Australia.  Now, they not only share a house together as best of friends but have found their permanent residency with the solid support of their RSMS employer Tristar Industries.